The Awards Ceremony was held for the second time at the Lugano Convention Center’s Palazzo dei Congressi, which allowed 550 people to attend, including distinguished personalities and representatives of the political class.
The National Jury, chaired by Jean-Pierre Vuilleumier, evaluated the 10 finalist projects and decreed the five winners.

The National Jury’s winner of the fifth edition and of the full EMBA Scholarship is AliperTharapeutics.

Aliper Tharapeutics is a start-up created as a spinoff of the Institute for Research in Oncology (IOR) in Bellinzona with the aim of developing pharmacological treatments for prostate cancer.
It offers a drug composed of bacteria that can help standard therapies work better and delay the development of severe forms of the disease.

The State Councillor Christian Vitta, in his opening video message, underlined the importance of the Boldbrain program in the development path of early-stage startups “A growing program that offers an enriching experience for participants and is an important part of the strategy developed by the Canton to support startups. As the Department of Finance and Economy, we strongly believe in this initiative, which represents a shared investment in the future of our economy and our Canton.” 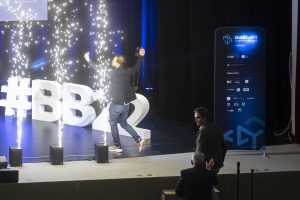